Paneer Jalfrezi is a delicious vegetarian stir-fry curry that has a heavenly melange of paneer or Indian cottage cheese, onions, and bell peppers in a spicy onion tomato sauce.

This restaurant-style Paneer Jalfrezi is a vegetarian dish that can be made within 15 minutes. Goes perfectly well with jeera rice, roti, or naan.

On this page, you will get a step-by-step Paneer Jalfrezi picture recipe and video recipe. It is super easy that fits it into a ‘must try recipe at home' category.

Why would you love Paneer Jalfrezi?

You would love Paneer Jalfrezi because, it:

✔ is delicious and easy to make

✔ is made from scratch in just 15 minutes

✔ made with basic Ingredients

✔ is great for festive/party meals

✔ can also be packed in the lunch box

✔ is an easy and healthy stir fry

✔ is suitable for keto, plant-based, and low carb diets

✔ is vegetarian and gluten-free

✔ is rich in proteins

✔ can also be used as a wrap or sandwich filling

✔ can be made with store bought or homemade paneer

Jalfrezi is a popular semi-dry spicy and tangy Indian stir-fry dish where meat (such as chicken, lamb, fish), vegetables, or paneer get cooked in a spicy and tangy thick tomato sauce.

Jalfrezi, also known as jhal frezi, originated from the Indian state of West Bengal, and is now popular throughout the Indian subcontinent.

In Bengali language the word Jal = Spicy Food, and Frezi (phorezi) = suitable for a diet.

It is believed that Jalfrezi dish was invented during the time when Britishers ruled India. Jalfrezi was invented to spruce up the leftover meat dishes. In the dish jalfrezi, leftover meat was stir-fried with onion, bell peppers, and tangy and spicy tomato sauce.

Jalfrezi is popular throughout India and other subcontinents for its unique taste and easy cooking process.

Jalfrezi dishes such as Paneer Jalfrezi, Vegetable Jalfrezi, chicken jalfrezi, or lamb jalfrezi, are one of the most popular dishes served in Indian restaurants worldwide.

What is Paneer Jalfrezi?

Paneer Jalfrezi is one of the best tasting Paneer dishes where soft paneer cubes, bell peppers (capsicum), and onions are cooked in a rich tomato sauce. This is one of those paneer dishes which you will find at most of Indian restaurants worldwide.

Basically, Paneer Jalfrezi is more like a cheese version of chicken jalfrezi. However, here you swap chicken with paneer or Indian Cottage Cheese. Hence the name is Paneer Jalfrezi.

If you are familiar with Indian food, then you would know that Paneer is an integral part of Indian cuisine, and it is widely used in Indian curries, bread, desserts, and many more Indian dishes such as Palak Paneer, Matar Paneer, Paneer Makhani, Paneer Bhurji, Paneer Stuffed Naan, Paneer Tikka Masala, Rasmalai, Rasgulla, Rajbhog and many more.

How to make Paneer Jalfrezi?

Making paneer Jalfrezi from scratch is pretty basic and can be done in under 15 minutes when you have all the veggies prepared. Slicing onions and bell peppers would be the only time taking thing here.

This is how you can make Paneer Jalfrezi in 5 simple steps:

After that add onions and cook. Add ginger-garlic, spices and cook more.

For a full list of Paneer Jalfrezi recipe ingredients and step-by-step photo and video instructions, please see the recipe box on this page.

What are the ingredients needed for Paneer Jalfrezi?

Paneer Jalfrezi is made with very simple and basic Ingredients used in Indian kitchens. You can easily find them all at any Asian grocery store. Following is the detailed list of ingredients.

It is the star ingredient of this recipe. So make sure to use the best quality paneer. I love to make my own paneer because homemade paneer is just the best. However, if you can’t make paneer at home then feel free to use store-bought paneer. That would work too.

Bell Peppers are the second important ingredient for this paneer jalfrezi recipe. I have used a combination of red, green, yellow, and orange bell peppers, but you can use any color bell peppers for this recipe.

Onions play an important role in this recipe. They add a nice texture and crunch to this stir-fry. So I always use sliced onions. You can use yellow or white onions for this recipe.

I used freshly minced ginger and garlic for this recipe because they jazz up the taste of this dish. But you can also use store-bought or homemade ginger-garlic paste.

It adds a nice tang to the Paneer Jalfrezi. I have used canned tomato puree in this recipe because it provides a nice color to this dish. But you can replace the store bought tomato puree with the same amount of freshly homemade tomato puree.

Adds a tangy and mildly sweet note to this dish. Not compulsory but highly recommended.

It is added for a tangy touch.

How to make it Vegan Paneer Jalfrezi?

In this Paneer Jalfrezi recipe, Paneer is the only ingredient that makes it not suitable for vegan-friendly diets. So if you want to make this curry vegan is fairly simple. Just exchange paneer with tofu, and follow the same recipe.

Can we swap Chicken with Paneer?

Can we add other vegetables to this Curry?

How to store Paneer Jalfrezi?

Paneer Jalfrezi can be stored in the refrigerator for up to 2 days when kept in an air-tight container. Just reheat in the microwave or a pan right before serving.

Can I freeze Paneer Jalfrezi?

Paneer Jalfrezi is a stir-fried dish and tastes best when it is made fresh. It is a quick and simple dish that hardly requires any preparations, so I would recommend making it fresh. You can freeze this stir-fry but this would lose its texture and flavor after freezing.

How to serve Paneer Jalfrezi?

Paneer Jalfrezi can be served with rice, pulao, duppad roti, laccha paratha, whole wheat naan, tandoori roti, or any other flatbreads of your choice. It also tastes good with other grains like quinoa, and couscous.

If you are planning to go for an elaborated Indian party meal, then serve Paneer along with garlic naan, chana masala, matar pulao, boondi raita, papad, salad, and Indian sweets like this gulab jamun on the side.

What are the Pro Tips and Tricks for Making Paneer Jalfrezi?

Tip 1. Homemade Paneer that is soft and fresh tastes best in this recipe. When using store bought paneer, make sure to use fresh paneer. If your paneer is firm, then soak it in hot water for 15-20 minutes before slicing and adding to the recipe.

Tip 3. Make sure to add vinegar, garam masala, and Kasuri methi at the end right before adding the paneer cubes. This step would ensure that your Paneer Jalfrezi would taste just like the ones you get at the restaurants.

Tip 4. You can easily double or triple the amount of this recipe.

Tip 5. You can use leftover paneer jalfrezi for making vegetable wraps. You can also use it as a filling for your sandwich or paratha.

Tip 6. For this Paneer Jalfrezi recipe, I have used a mix of bell peppers. Feel free to use any colored bell pepper of your choice or whichever is handy.

Tip 7. Make sure to add the paneer cubes at the end. Also, make sure to not overcook the panner, or else it will become chewy.

Tip 8. Use tofu for making a vegan version of Paneer Jalfrezi.

Tip 9. Instead of chopping or dicing, make sure to slice vegetables lengthwise. They taste great and add a nice crunchy texture to this dish.

Tip 10. I have used store-bought tomato puree for this paneer jalfrezi recipe. But you can also use homemade tomato puree.

Tip 11. To make no onion garlic paneer jalfrzi, remove onion and garlic from the recipe. 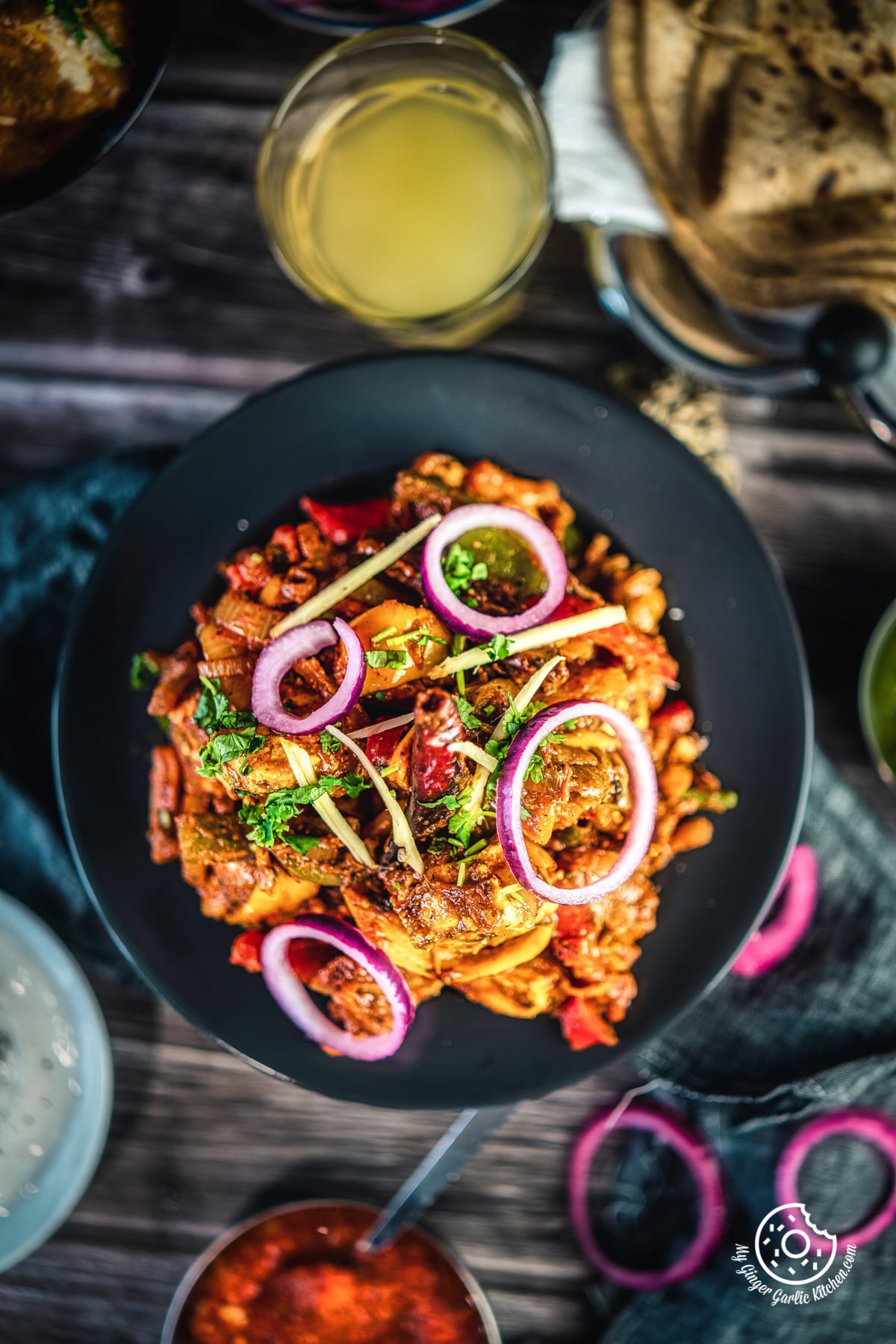 Paneer Jalfrezi is a delicious vegetarian stir-fry curry that has a heavenly melange of paneer, onions, and bell peppers in a spicy onion tomato sauce. ★★★★✰
(Rating: 4.8 from 5 reviews)

How to Make Paneer Jalfrezi:

More paneer recipes you can add to your festive meals are: