Learn How To Make Easy Instant Naan | Yeast Free Whole Wheat Naan Recipe with an easy video tutorial and easy, simple step by step photo instructions. Instant Whole Wheat Naan is basically a simple, quick and easy flat-bread which is usually served with curry, rice and stew. Making this healthy Wheat Naan aka ‘Atta Naan’ without oven/tandoor is very simple. And the good thing is that this recipe takes only 40 minutes from start to finish.

You must be wondering that I keep saying summer is not here yet, then, how come there is Midsummer already?

Yes, it is conflicting. Let me clear all your doubts.

When I say summer is not here and it’s Midsummer, I am 100% true in both of cases. How can both of these be true?

Well, Summer hasn’t arrived yet, instead it’s raining cats and dogs here. Yeahh! It’s all dark, still cold and pouring. So it certainly does not feel like summer here yet! Therefore, its true.

And it is Midsummer because it’s officially Midsummer going by the calendar. So its also true! 🙂

Midsummer is a National holiday in all the Nordic countries including Finland. Here it’s a 3-day long weekend. Yayyyy!

This year Midsummer celebration is on Saturday, 20th June. And there is a tradition of bonfire on Midsummer.

It is said that, and I quote, “In the old days, bonfires were lit during Midsummer to keep evil spirits away and ensure a good crop come time for harvesting”. Also going loud and getting intoxicated has now become an important part of Midsummer celebrations.

There are some people who believe that loud behavior would bring luck and drive away evil spirits. Some people also think that the amount of drink (read as alcohol) they consume in Midsummer would correlate to the magnitude of the harvest at the end of summer.

As this is a long weekend, so every year some people decide to go to countryside or other cities to meet family, and some will stay in the city.

We will go for bonfire, if it’s not raining like today. Otherwise we will stay at home partying out loud. Well, we are allowed to do that, at least on Midsummer! 😉

And in all this excitement, let me tell you about my today’s recipe Naan

My today’s recipe is “Yeast Free Instant Whole Wheat Naan”. Yes, it is yeast free + it is made with whole wheat + this is instant + they are home made + no oven needed. WOW, so many pluses in a single dish 😉

Yes, no oven is needed to make these Naan. They can be cooked right on stove.

You will see that there is a lot to love about these Homemade Naan. Oh gosh! I really love homemade breads

I tell you an interesting story about how, why, and when I started making yeast free Naan. 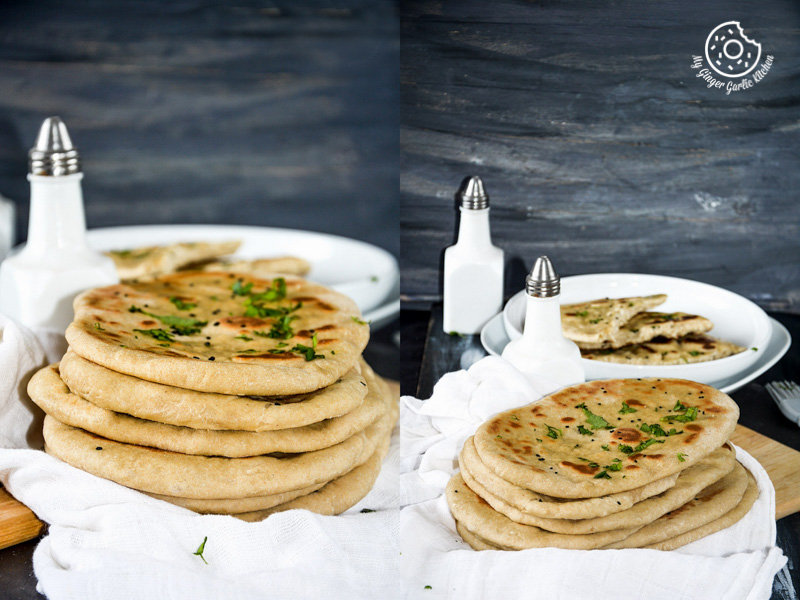 It was about 5 years ago when one of my Brazilian friends requested to taste homemade naan. She was not very fond of yeast, so it was better to be avoided.

Naan without yeast? Would it come out well? I thoroughly looked into the idea because I wanted to make some nice yeast free naan for my friend, but at the same time I was a bit skeptical about the whole outcome.

Then I called to my mom to ask her if she had any solution for that. She simply suggested me to try her yeast free version of Naan. I was surprised that I was thinking about it so deeply, and she came with an awesome idea in just a couple of minutes.

Amazing, isn’t it? Moms are the best. I think it was her long experience of cooking that coming out with this idea wasn’t difficult for her at all. But for me it was such a big deal! 😉

Anyways, finally after talking to my Mom I decided to cook this yeast free version of Naan which my Mom told me.

So I Invited my friend for dinner one weekend. Just to be sure about the texture of my Naan, I made a trial batch a day before I invited her 😉 You see, practice makes perfect!

They came out so well. All soft, pillowy with a nice smoky aromatic smell. Abhishek just loved that yeast free version of Naan. He wanted to have the same for dinner, but unfortunately we did not have any leftovers.

Next day, I cooked some extra Naan, so that my Husband dear would enjoy them for lunch. Not to mention that my Brazilian friend LOVED the dinner, especially homemade Naan. That day she learnt to cook yeast free Naan from me. And now she makes her own Naan! 🙂

So this is how I made my first yeast free Naan.

If I would say that these Naan would taste like the ones you eat at the restaurant, I would be lying to you. Because they will not. In the restaurant Naans are cooked in tandoor and with yeast. So they come out more crisp.

But, wait! Who says crispy naan is always the best Naan. I mean, here I am talking about a homemade Naan. Yeah, there is nothing better than this pillowy soft Naan with big air bubbles. 🙂

It’s amazingly aromatic! And I promise you, these Homemade Naan are 100 times better than a store-bought one. Honestly, they are by far the best! Don’t believe me!? Try it, and you will talk the same thing! 🙂

So this is how I made my first yeast free Naan.

If I would say that these Naan would taste like the ones you eat at the restaurant, I would be lying to you. Because they will not. In restaurant Naan are cooked in tandoor and with yeast. So they come out more crisp.

But, wait! Who says crispy naan is always the best Naan? I mean, here I am talking about a homemade Naan. Yeah, there is nothing better than this pillowy soft Naan with big air bubbles. 🙂

It’s amazingly aromatic! And I promise you, these Homemade Naan are 100 times better than a store bought one. Honestly, they are by far the best! Don’t believe me!? Try it, and you will talk the same thing!

And if I tell you the truth, I like this version much better than the yeasty one. I think it is the yogurt in the dough which adds the best flavor.

Oh my gosh! It is so soft and those big air pockets look so fluffy. Yeah they are wonderful!

Now I end up making this yeast free Naan quite often. Reason is simple — instant food is the best for sudden cravings! 😉 No watching and waiting for the dough to rise. Don’t forget the magic ingredients — yogurt and a hint of baking soda and baking powder. Seriously, I just can’t even get over these. There are no words to describe the goodness in every bite.

There you have it. No yeast, no wait and pillowy Naan are ready in no time. Enjoy with your favorite curry.

These are some of my favourtie curries I like to eat with my Naan:

Sift the flour in a kneading bowl. Add salt, baking powder and baking soda. Mix well. Form a well in the center, and pour yogurt and oil right into the middle. Start mixing together, and add about 4 tbsp of warm to knead smooth dough.

You can use more water if needed. Once the dough is ready, cover it with a kitchen towel or plastic wrap and keep it aside for 30 minutes. When ready to cook divide the dough into 8 equal balls.

Spread seeds and coriander. You can also do this once you roll the dough ball. Repeat the same method with the rest of the dough.

Brush both sides of the naan and place the naan on the hot pan, and cover with a lid and bake for 1 minute, until you see bubbles starting to form. The lid should fit the pan to cover the flat bread.

Flip and cook for 1­ minute on the other side, until your see the upper side is fully cooked, and dark brown starts to appear. Brush with a some more butter, and repeat with the rest of the naans. Once done, place the naan in a towel­ lined dish and serve. Serve it hot with some curry on the side.

Or cover with aluminum foil for later use. 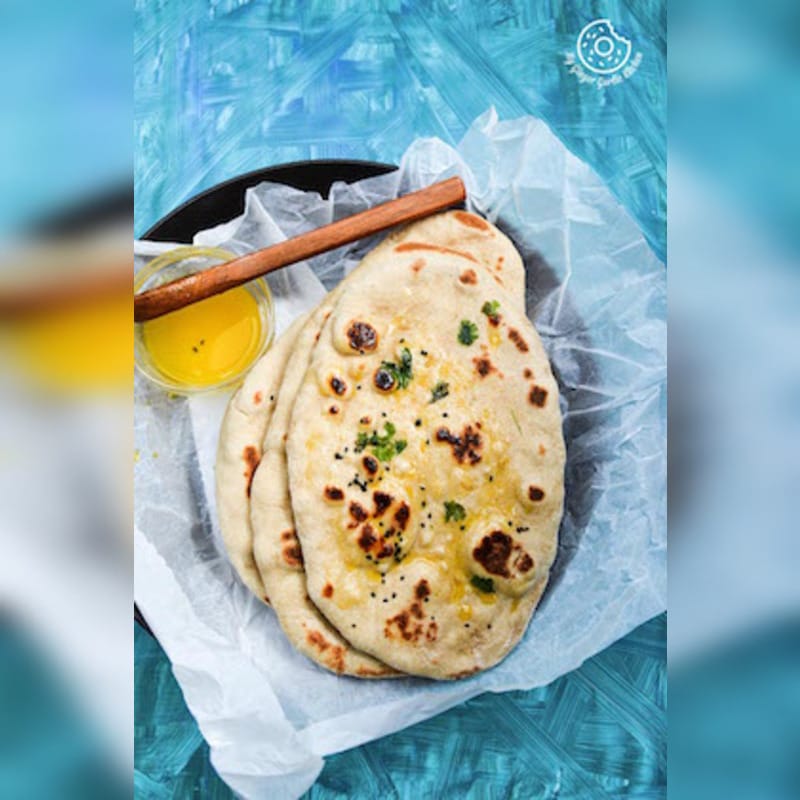 This Easy Instant Yeast Free Whole Wheat Naan is basically a simple naan recipe made on tawa with yogurt and some baking soda. ★★★★✰
(Rating: 4.1 from 692 reviews)