In India, a party without tandoori starters is not a party at all.  Be it a get-together, barbeque, or dinner parties, tandoori dishes are a must.

This is a great starter option whether you’re feeding to a crowd or simply feeding your family. Your guests will surely relish the real flavors of this paneer tikka utterly, so be ready to hear some wows!

This is an easy recipe for paneer tikka.

When we talk about starters or appetizers, then one of the first dishes which comes to everyone’s mind is tikka. Here, Tandoori Paneer Tikka is especially favored, because it has that ideal mingle of spices.

The smoky flavor of the marinated and tandoor-cooked paneer is simply jaw-dropping. Hard to describe in words, one has to taste it to live that inexpressible feeling.

Today I am sharing is the best recipe for Tandoori Paneer Tikka you will ever cook at home. It has the same taste you get at your favorite restaurant. And the good thing is that this recipe can easily be replicated at home without a tandoor.

Yes, it is possible to have that restaurant style taste in Tandoori Tikka with the simple kitchen gadgets you have such as, tawa/pan, home oven, panini/grilled sandwich maker, or just with a simple disposable grill.

So in short, roasting a tikka to the charred perfection is very much possible at home.

I love the homemade tandoori paneer tikka because it is so easy to prepare, and tastes so incredible just like you get at the restaurants.

What is paneer tikka?

Many of you might wonder about ‘what is paneer tikka’? This post explains everything about paneer tikka such as how it is different from paneer tikka masala, many possible ways of grilling it, etc.

This is one the most favored menu items at the Indian restaurants worldwide. This is one of such dishes which you usually find at any Indian restaurant, small or big. Moreover, this dish is mostly the star-of-the-menu dish. Thus this will be at the top of the menu list.

Paneer Tikka is an Indian appetizer where paneer chunks are marinated with fiery yogurt mixture and then it is authentically grilled in a Tandoor, which is a name for the traditional North Indian clay oven.

Paneer Tikka is a great vegetarian alternative to the non-vegetarian dishes such as Chicken Tikka, Fish tikka, or any other satay.

Tikka is a dish made with small chunks of meat/vegetables which are first marinated in a spicy yogurt mixture and then roasted in a clay oven.

What is Paneer? What is paneer (cheese) made of?

Paneer is an Indian version of cottage cheese which is made by only 2 ingredients. You curdle full cream milk with any of the following agents: lemon juice, white vinegar, yogurt or buttermilk. You can make it at home, or you can use the store bought.

How to make paneer at home?

Here’s how to make paneer at home. First, you boil fresh milk.

Add your desired agent, and allow milk to curdle. Drain the whey and rinse with ice cold water. Wrap it in a cheesecloth and put under pressure. Paneer is ready to use. Cut into desired cubes and make your favorite paneer dish. You can find the detailed version of homemade paneer recipe here.

Where to buy paneer cheese?

How long paneer can be marinated?

Paneer does not require long marinating time, just 30 minutes is all you need. This marination can also be done the day before, but it has to be refrigerated all the time. Add paneer to the marinade only 30 minutes prior to baking/roasting.

How to serve paneer tikka?

Paneer tikka can be served as a starter or an appetizer. Simply sprinkle some chat masala and drizzle some lemon juice. Serve it hot along with green coriander chutney, or mint coriander chutney along with some sliced onions. The flavourful chutney and the crunch of onion would levitate the taste and flavor.

Cooking tandoori paneer tikka in the oven it still is a serious thing for many people in India. They are like helloooo!! Tandoori Paneer Tikka at home without a tandoor? In the home Oven?? In a Pan? In a Panini maker? Is it even possible?

Yes, people are so sensitive about Paneer dishes, especially the tandoori ones.

For many folks, it has to be just perfect the way they get in the restaurants. Many of my friends have been asking about this recipe for a long time, so here I am with 4 tikka roasting options for those who want a foolproof recipe.

I know no one wants to mess up a tikka dish, that’s is why this fail-proof recipe is for you. And trust me, these simple hacks can really make your cooking experience way easier. 🙂

What is the ideal texture and taste of paneer tikka?

In a perfect paneer tikka dish, paneer cubes have to be little crispy and charred on the outer surface. This charring gives that exotic smokiness in the dish.

From inside it has to be silky, light, soft, and melt-in-mouth. Each and every piece of tikka has to be thoroughly marinated so that you get all the flavors well.

How to marinate paneer for BBQ?

I have added gram flour/ besan to the marinade because it helps in coating the paneer well. Beat it until smooth. Now add Kasuri methi, lemon juice to the mixture and mix well again. Add paneer and mix gently to coat the paneer well with the marinade and refrigerate for 30 minutes. Skewer it. Your marinated paneer is ready for grilling.

How to make Tandoori Paneer Tikka in at home?

Making paneer tikka at home is very simple and easy. For this recipe, I have cooked the tikka in 4 ways (oven, pan, grill, panini maker). This is how you can make your restaurant style paneer tikka recipe at home.

Step 3: Marinate the paneer and vegetables

Step 4: Thread paneer and veggies in a skewer

How to make Tandoori Paneer Tikka in the oven?

For making it in oven simply follow these steps:

Step 4: Remove the pan with the skewers out of the oven. Done.

Isn’t it fairly simple and quick?

You can check out detailed recipe in the recipe box on this page.

How to make Tandoori Paneer Tikka in a Grill?

Grilling on a disposable grill:

Step 2: Then grill the tikkas till char and cooked through.

Grilling In A Panini/ Sandwich Maker:

Step 2: Place the tikka skewers and grill for about 3-4 minutes on each side.

How to make Tandoori Paneer Tikka In a pan/tawa?

Step 3: For the char perfection, place roasted tikka on a papad roaster. Done.

You can check out all these cooking methods in the recipe box on this page.

How to cook paneer tikka?

Paneer tikka can be cooked on the stove top using a tawa or grill pan. It can also be grilled using an open grill, or panini maker. It can also be baked and then broiled in an oven.

How to make paneer tikka in a microwave? Can I make Paneer Tikka in Microwave oven?

Yes, you can. Marinade the paneer. Thread onto a wooden skewer. Brush all the sides with some oil. Arrange it on a greased microwavable plate. Microwave uncovered on high heat for 2-3 minutes. Flip and microwave again on high for 2-3 minutes and serve.

This easy and quick Tandoori Paneer Tikka Tandoori Paneer Tikka Recipe – 4 Ways ( in The Oven, Tawa, Grill) shows, how you can smartly dazzle your guests by making this best-loved party starter at home — it can quickly and simply be made using a simple non-stick tava/tawa, or a grill pan. And that too, with the same charred perfection you get in the tandoori tikka.

Tips and tricks on how to make restaurant style paneer tikka at home: 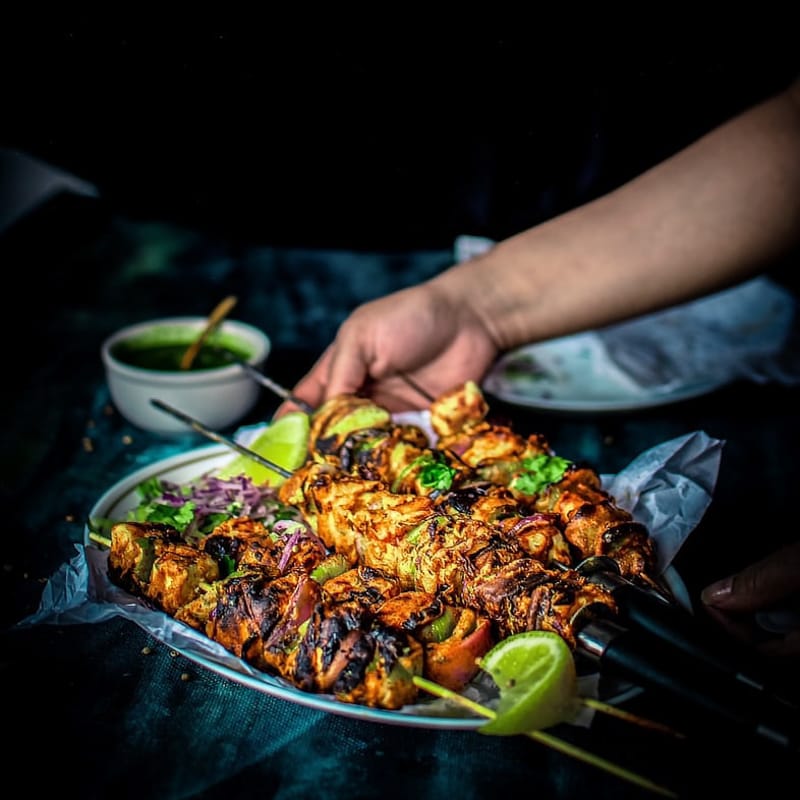 #1 How To Roast Paneer Tikka On Tawa/ Pan:

#3 How To Grill In A Panini/ Sandwich Maker:

#4 How To Grill on a disposable grill: