Mint Coriander Tandoori roti is a tweaked and aromatic version of very popular Indian flatbread which is made from whole-wheat flour which is usually made in a clay oven called a tandoor.

Friday meals should be light: I have realized that I usually share something lighter on Fridays, because you know I just love fridays. They make me feel that the joy of weekend is about to begin.

A base of many dishes: However, this time I decided to share something which could be the base of many of your favorite dishes and which you sure can eat it on its own too. It’s just fantastic. ‘The dish is Mint Coriander Tandoori Roti’, which I have been waiting to share on a perfect day. But the fact is that even I didn’t know which perfect time I’ve been waiting for. And today I found out about the perfect time to share this flatbread recipe. That time was when I don’t have anything scheduled to share. And today is one of such days when I had nothing to share, because I didn’t really work on recipes this week. Still I am in a holiday mood. 🙂

Perfect Moment: Then I found this recipe and at that moment I said to myself, “Yes, this is that perfect moment I was waiting for.” So here we go with this Mint Coriander Tandoori Roti.

My love for homemade breads: Who doesn’t like homemade breads??? For a fact, I very much love homemade breads. I always try to make breads at home, because they come with fresh baking aroma, and are so soft and buttery. Plus, they are so perfect for a weekend lunch. So another green flag to share it on a Friday! 🙂

This roti is particularly special. How so? You know, I make a lot of flatbreads. They are the staple food in India, and this is the one which I grew up eating. So I really make them a lot, and most of these you don’t see here, because there are really an endless number of varieties, literally a lot.

New found love: I love a good tandoori roti and I have made them a million times, but this Mint Coriander Tandoori Roti is my new found love which I began to explore last November.

Inspiration: One day I bought big bunches of mint and cilantro, but then I completely forgot to use them. After a couple of days we had guests coming over for dinner — and for that my planned menu had tandoori roti along with a couple of curries, some Dal and pulao.

Best use of old herbs: Then I saw those bunches again and the first thought of using it was making some chutney. But then I thought that it would be very plain. So I should make something else and the next idea was using it in tandoori roti. Woah! That made me thrilled and I went for it. Believe me it was the most aromatic and refreshing tandoori roti I ever made. I have made the same recipe so many times after that day, because it’s just that good.

Long awaited one: The other day I realized that I’ve never shared one of my favorite tandoori roti recipes with you guys. So I thought why not sharing it on the blog now, because I know you guys will love it too. Then I shot this video a couple of months ago and edited it recently. Since then this is waiting for its chance to appear here. And today is the lucky day for this Mint Coriander Tandoori Roti! They are pretty happy to finally appear here; I must say 🙂

What is Tandoori Roti?

Tandoori roti is a very popular Indian flatbread which is made from whole-wheat flour which is usually made in a clay oven called a tandoor. This dish is commonly enjoyed with curry dishes.

Make it in oven:

This is so easy to make at home and the good news is that in this particular recipe you won’t need tandoor at all. This is made just using the oven. But if you don’t have an oven, then you can still make these rotis on the stove-top.

The dough for this tandoori roti is the regular chapatti dough + just a couple of more ingredients. 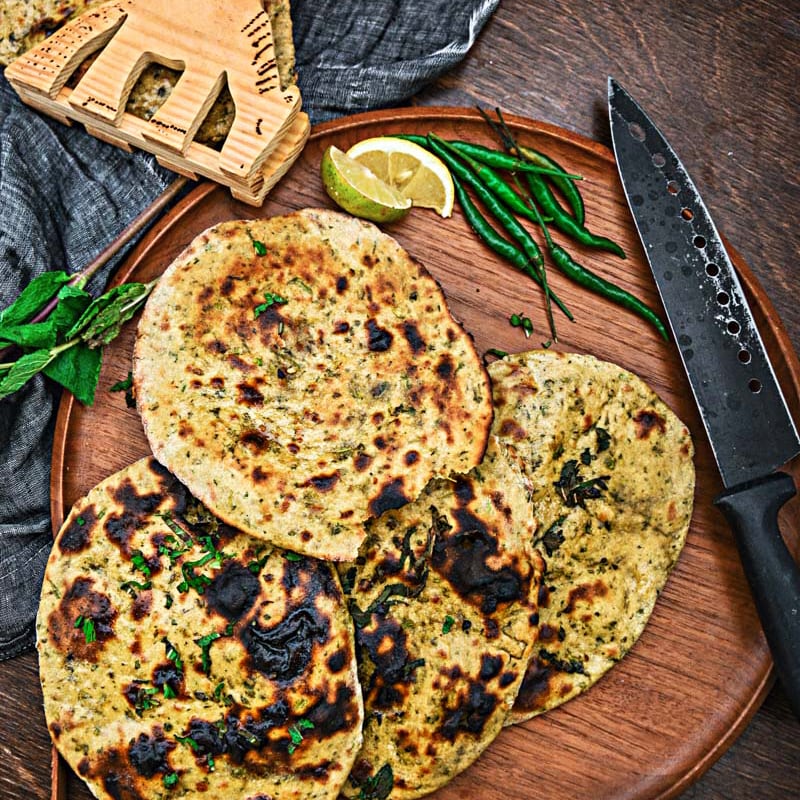 Mint Coriander Tandoori roti is a tweaked version of a popular Indian flatbread Tandoori Roti which is traditionally cooked in a clay oven aka Tandoor. ★★★★✰
(Rating: 4.7 from 75 reviews)