Learn how to make Bharwa Shimla Mirch Recipe | Stuffed Bell Peppers | Stuffed Capsicum Recipe with a simple and easy video tutorial. This is a flavourful, tasty, lip-smacking Indian style side dish cooked using a spicy filling made of mashed and stir-fried potatoes aka aloo.

Bharwa or Bharwan means ‘stuffed’ in Hindi language. Shimla Mirch is known as capsicum or bell peppers. The accurate translation of this bharwa shimla mirch is stuffed capsicum/ bell pepper. This dish is also known as Aloo Ki Bharwa Shimla Mirch in Hindi. 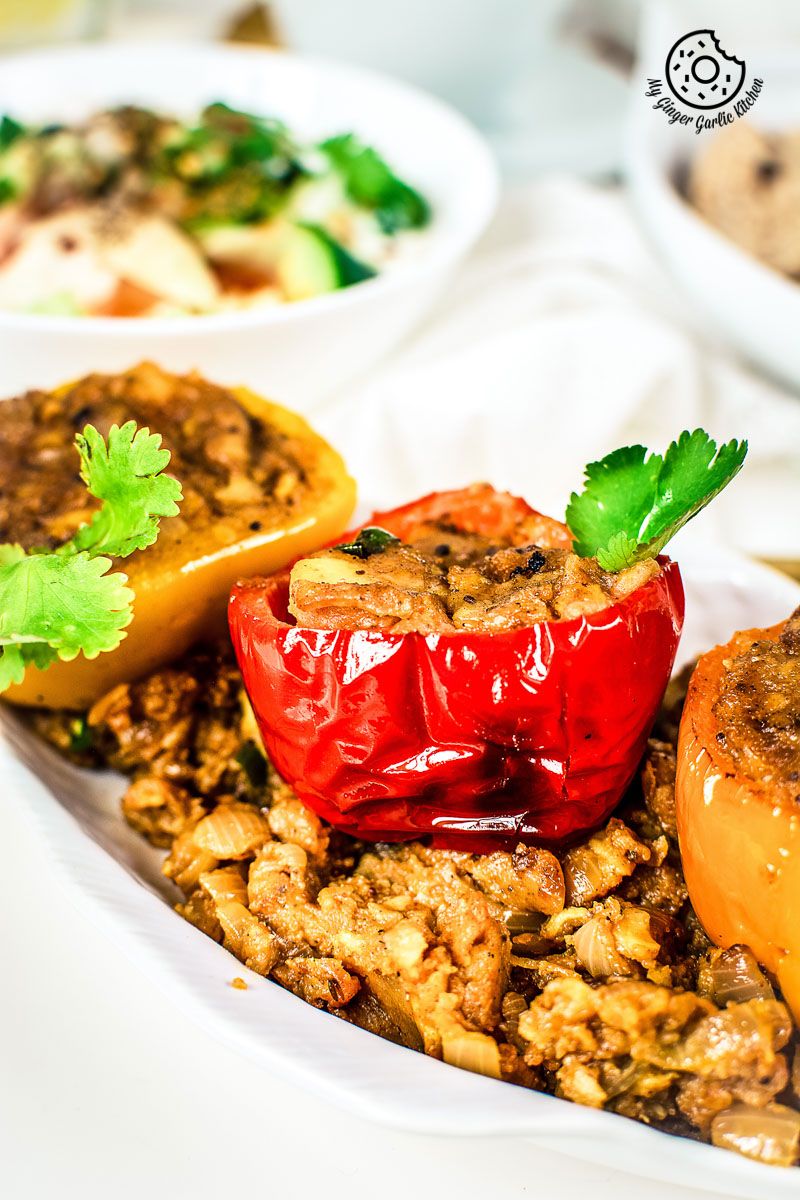 These easy and healthy stuffed bell peppers are vegetarian, vegan and gluten-free. You don’t need to have any professional skills to cook these deliciously homemade stuffed peppers. This bharwa shimla mirch requires no oven time, and is almost effortless to make. Another best part is this — they’re fun to make and eat.

What is Bharwa Shimla Mirch?

Bharwa Shimla Mirch is a gratifying side dish made of shimla mirch aka bell peppers stuffed with spiced and stir-fried potatoes.

What do we say Shimla Mirch in English?

Shimla Mirch is Known as capsicum in Indian English, or bell peppers in other words. 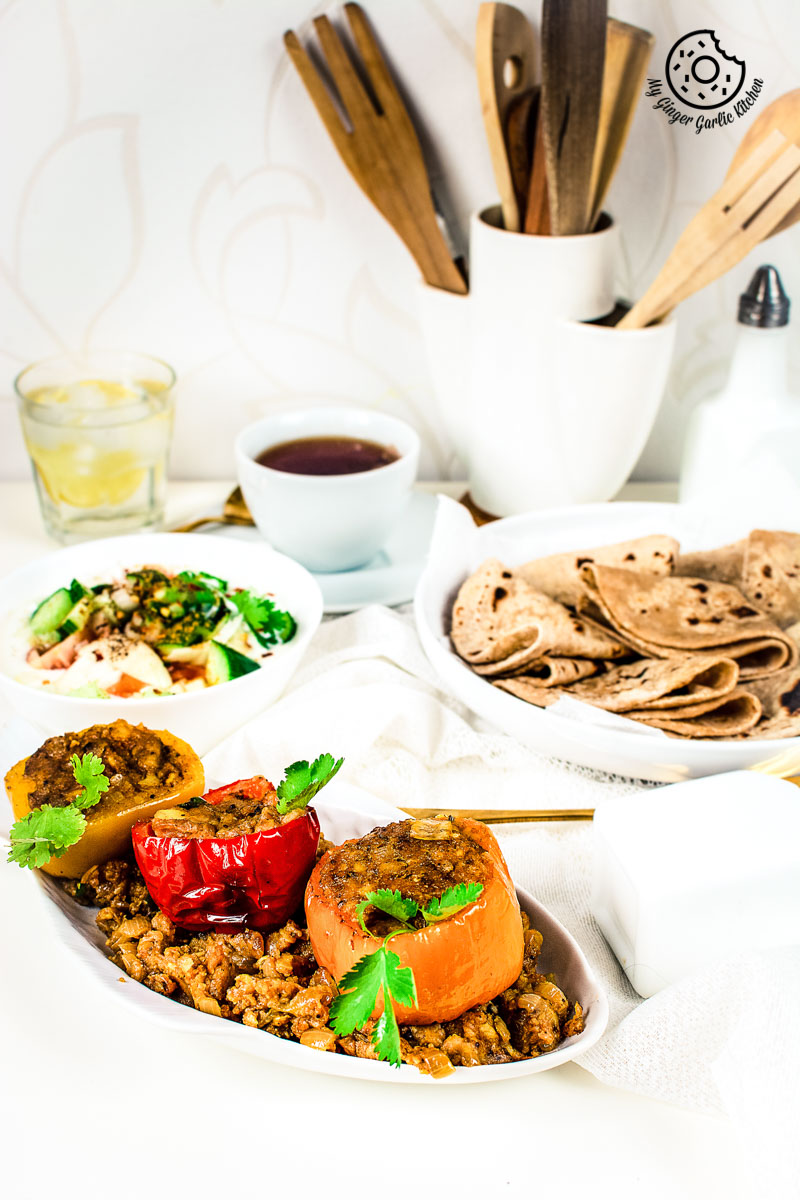 For preparing this side dish, you cut the capsicum/bell pepper into halves, remove the stem and de-seed them.

Then you fill the hollow capsicum shells with the spicy potato mixture. Some people also like to add grated paneer (Indian Cottage Cheese) to this recipe.

The spicy masala stuffing enhances the sweet flavors of capsicum. The combination of capsicum and spicy potato gives it a nice and unique taste. This bharwa shimla mirch is definitely a dish to live for. 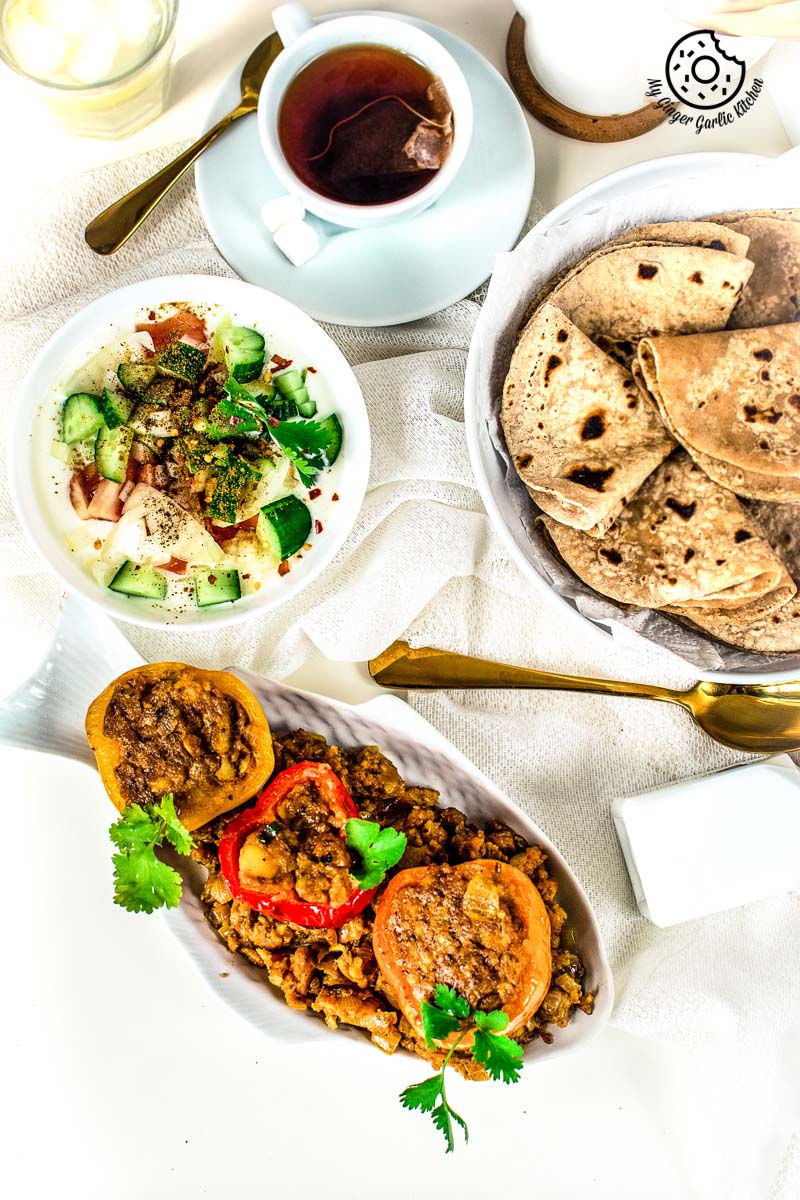 What else can I add to Stuffed Capsicum?

You can also add peas or corn kernels to the potato mixture for making Stuffed Capsicum.

How to serve Bharwa Shimla Mirch?

This Indian Style Stuffed Capsicum is a stunningly looking colorful dry side dish which makes a great addition to your lunch/dinner table. It goes perfectly well along with some raita, dal, and Indian flatbreads such as chapati or paratha. 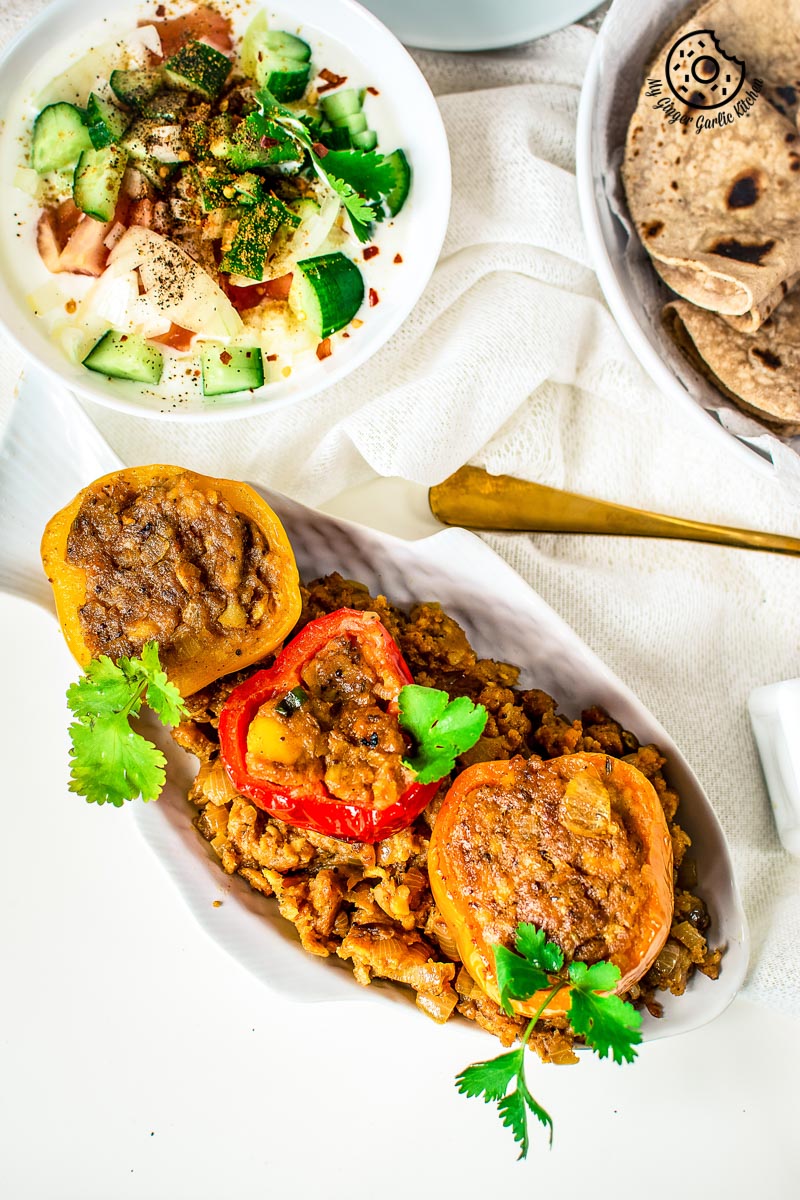 How to make the best stuffed bell peppers for parties?

You should possibly use colorful bell peppers for making it for parties, because they look presentable and more enticing. Any kind of stuffed dishes are exotic and toothsome. And these palatable and appetizing stuffed peppers are definitely suitable for serving in parties.

How To make Bharwa Shimla Mirch with paneer?

Simply swap the potatoes with grated paneer, and the rest of the recipe will be the same.

How do you make Aloo Capsicum Stuffed / Bharwa Shimla Mirch?

She stir-fries mashed potatoes with onions, green chilies, and dry spices. Then she packs the Shimla Mirch with that bhuna hua aloo ka masala.

For making bharwa shimla mirch with raw stuffing, you need to add all the stuffing ingredients to a mixing pan, except oil. Mix everything well and stuff shimla mirch with this mixture. Both of these versions are equally delectable. 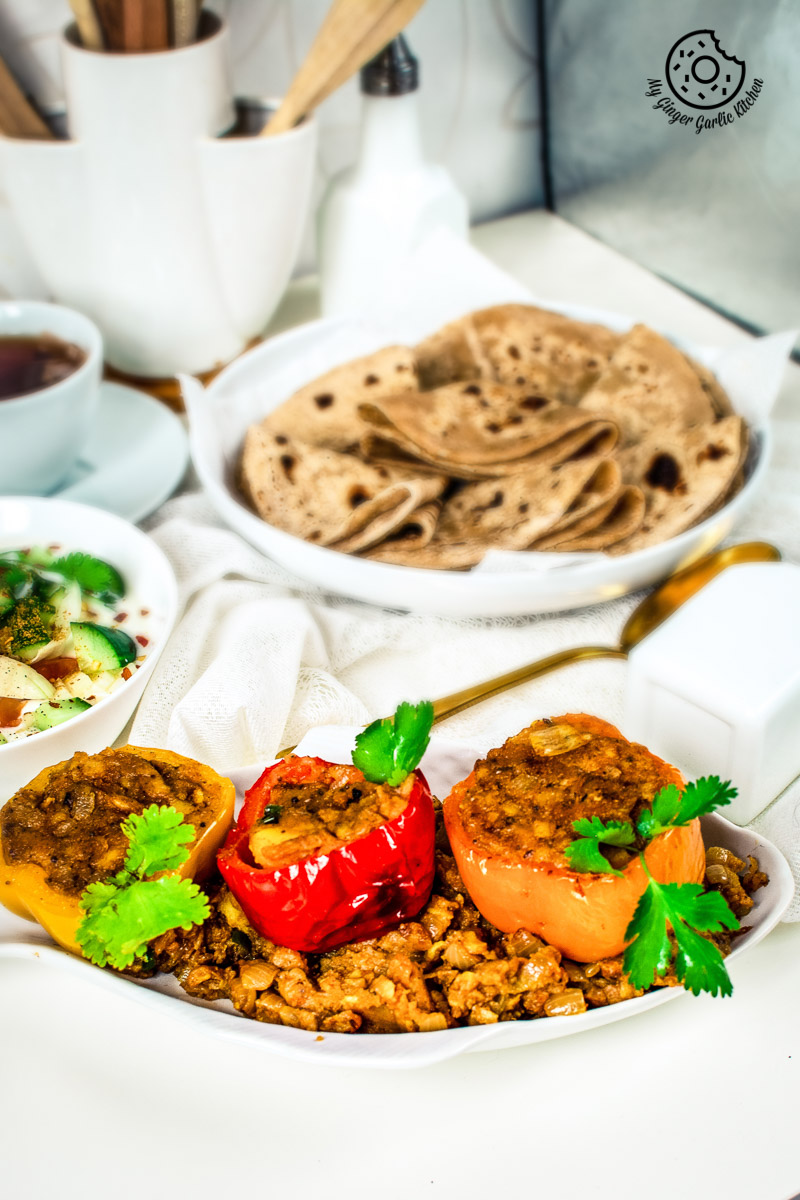 How to make capsicum filling?

There are mainly 4 ways of making Indian style capsicum filling. They are:

Can I bake this Stuffed Bell Peppers in the oven?

Yes, you can easily bake them in the oven. Spoon mixture into bell peppers. Simply brush the stuffed bell peppers with oil. Bake this in 375°F/190°C preheated oven for 25-30 minutes or until the peppers are tender. If you want those brown spots, then after 30 minutes, turn the oven to broiler settings and broil on high for 2-3 minutes.

How To Make Stuffed Shimla Mirch In Microwave?

Traditionally, stuffed shimla mirch is pan-fried. But you can easily replicate this recipe in the microwave. Following is the recipe. 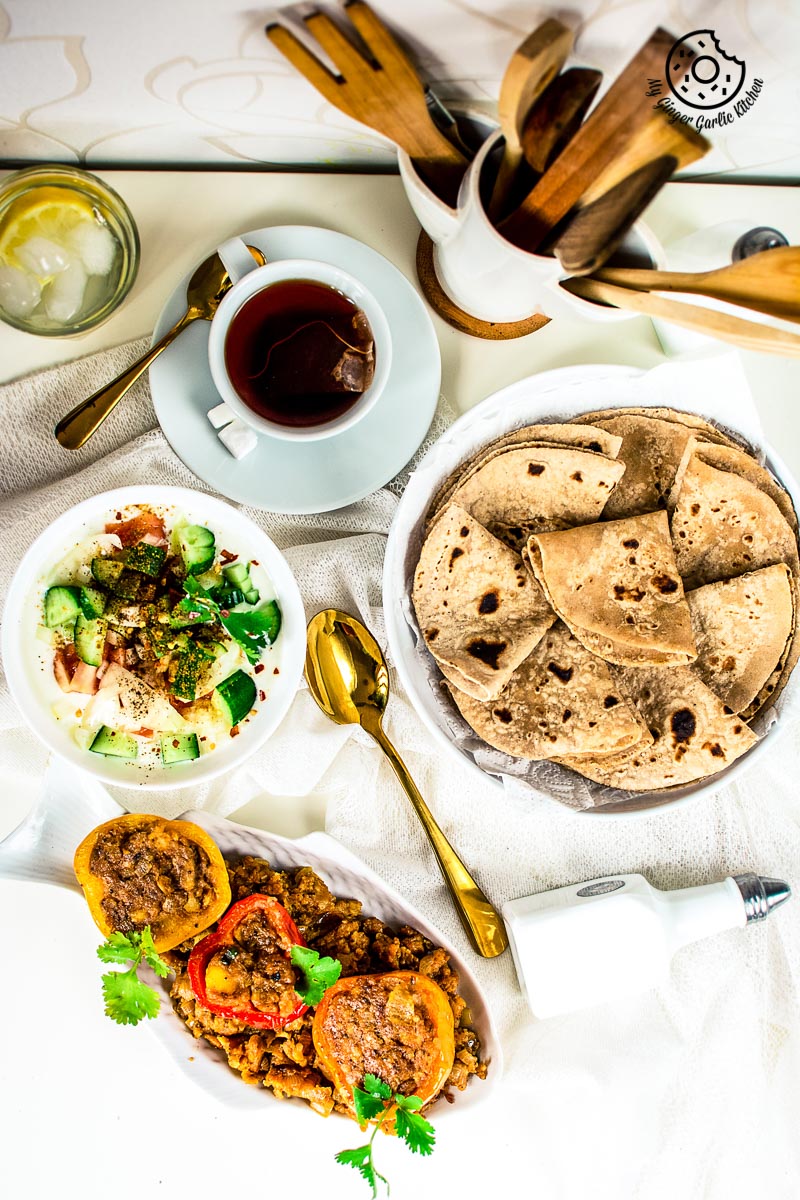 Some interesting facts about Shimla Mirch:

‘Shimla’ is the capital city and also a popular hill-station of the Northern Indian state of Himachal Pradesh. ’Mirch’ is a name for chili in the Hindi language.

Are red and yellow peppers the same?

All differently colored sweet peppers are all the same type of pepper — they are just at a different period or stage of ripeness. As the peppers age and ripen, their taste and color changes. Red ones are fully ripe, yellow ones half ripen, and green ones even lesser.

How long does it take to cook raw stuffed peppers?

There are many health benefits of eating capsicum/bell pepper.

They are an excellent source of Vitamin A and Vitamin C. Vitamin C as we all know enhances the immunity. 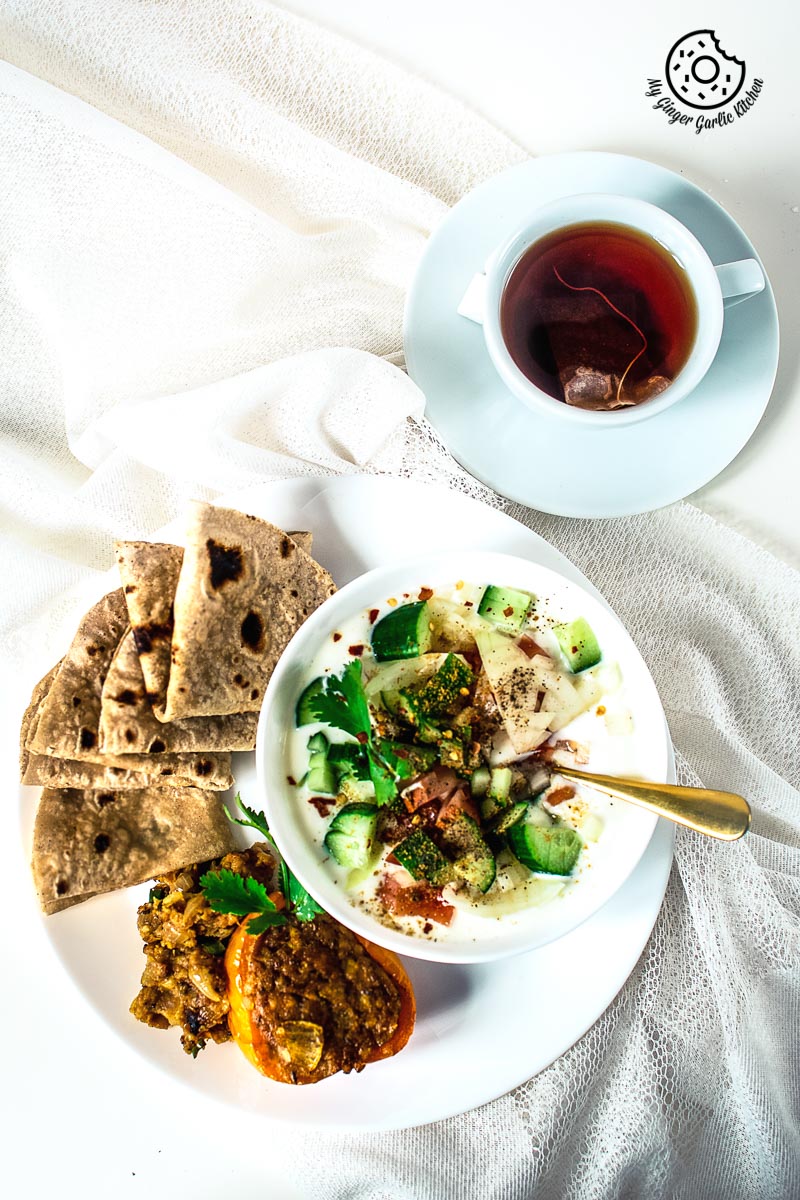 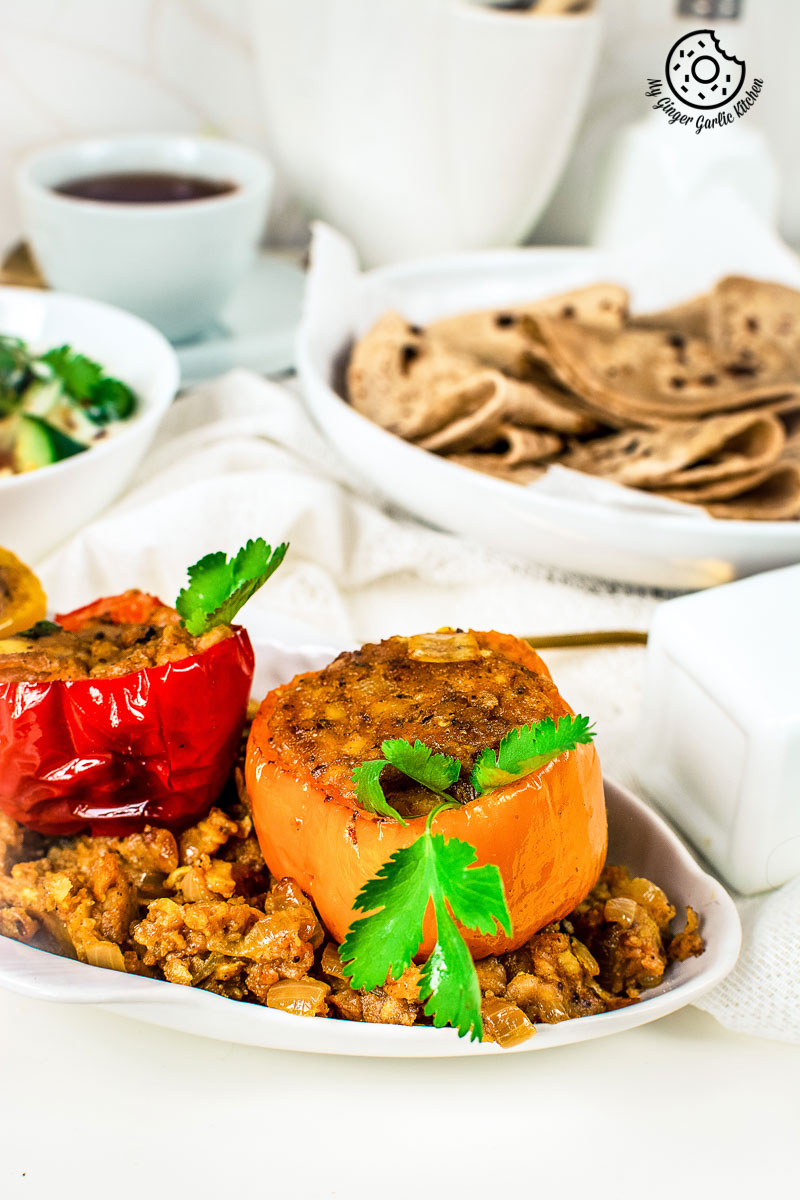 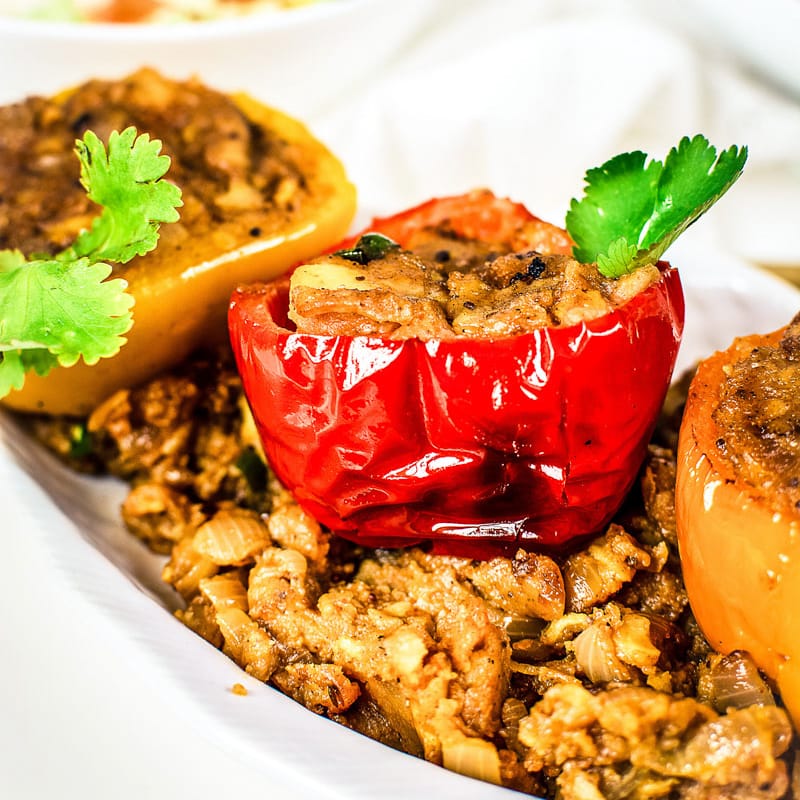 Cook Shimla Mirch/Capsicum In a Pan: