Learn to Make Vegetable Biryani Recipe | Restaurant Style Hyderabadi Veg Dum Biryani Recipe with step by step video tutorial. For this Hyderabadi version of veg dum biryani, we marinate veggies in spicy yogurt then we cook them with onions and tomatoes to make a nice gravy.  Then we simply layer rice with this gravy and slow cook it for about 15-20 minutes to get that perfect marinated infused flavor. 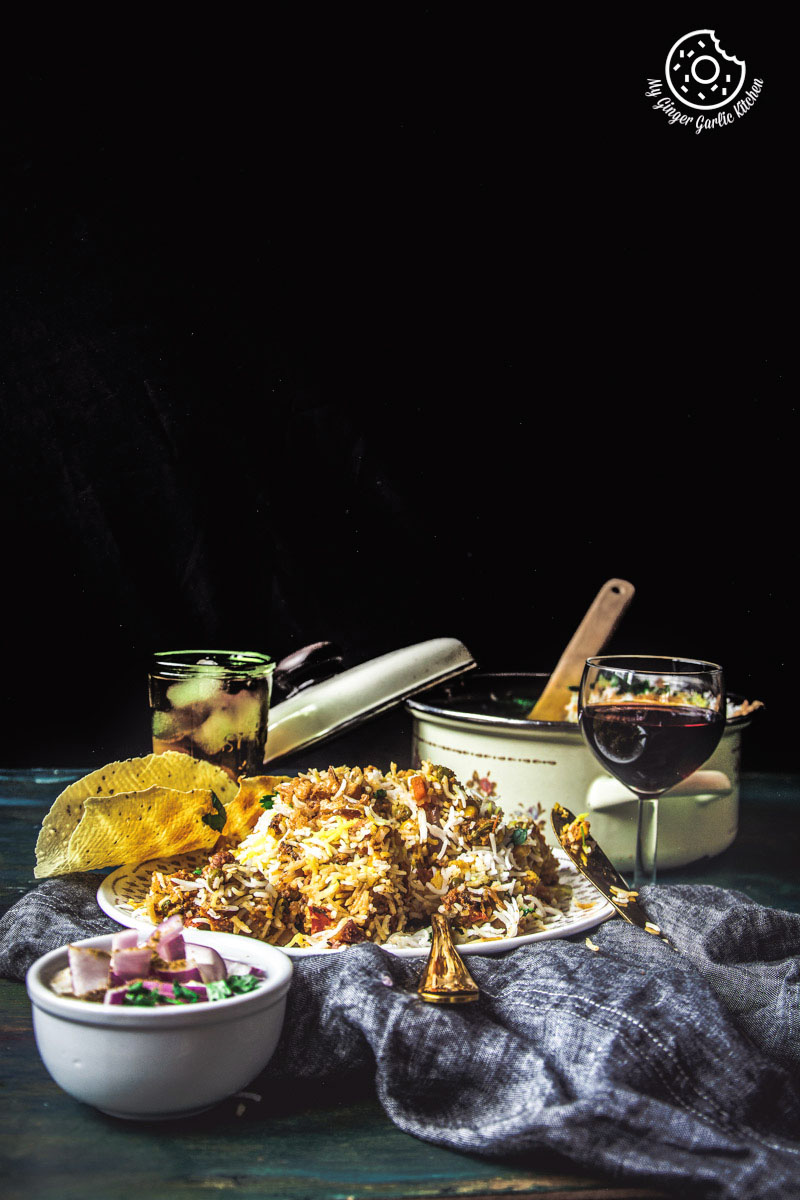 How was your Easter? Mine went so well. Spent some quality time with family after a long time, and obviously had pretty much festive and delish food. 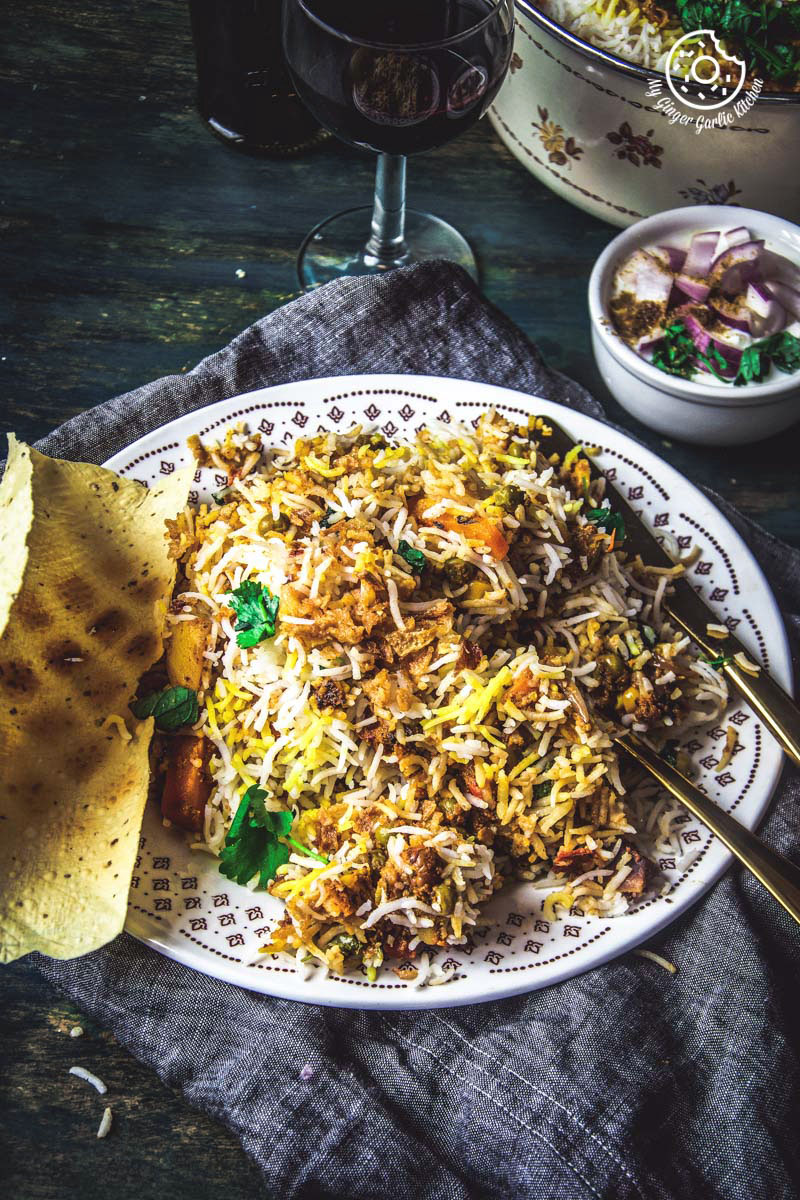 This year we had a small get together at home. And no to mention that my girlfriends and I cooked so many good things for Easter dinner. These droolicious preparations for this year’s Easter dinner were 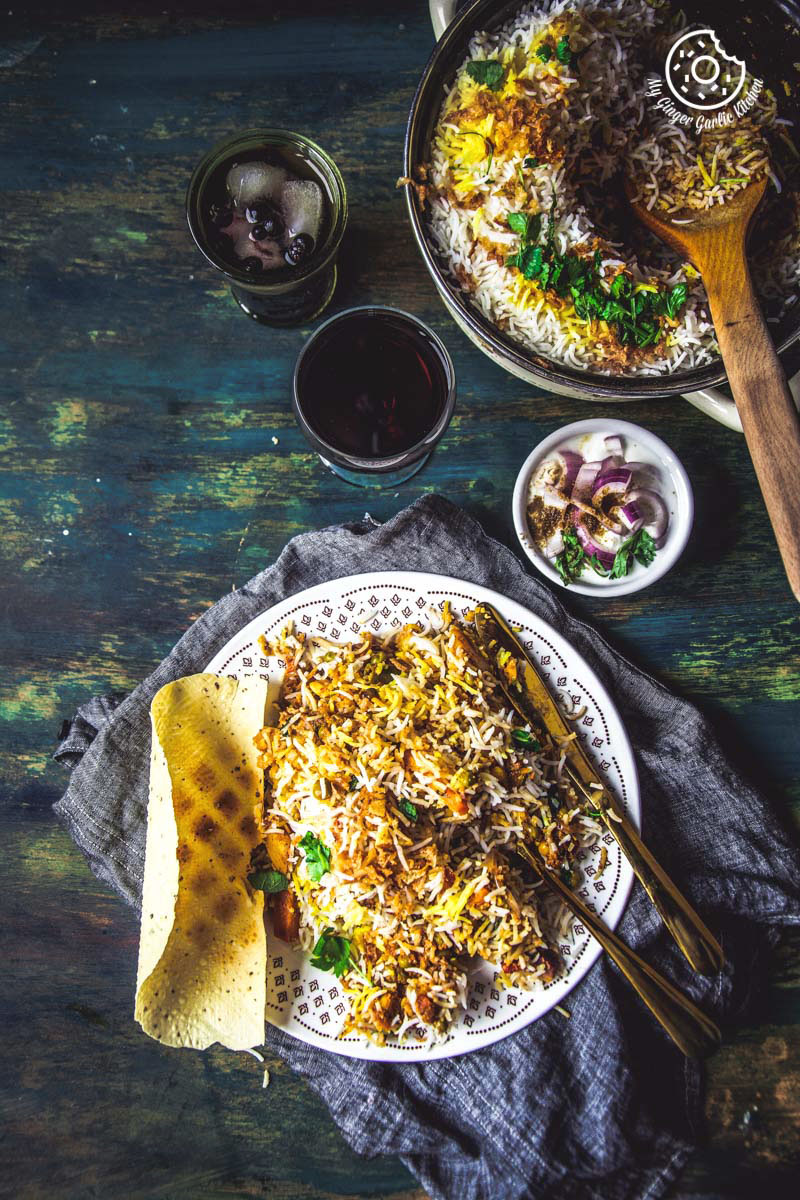 We actually flooded the Easter dinner table. Our male guests were really overwhelmed and so were we. 😀

In my last post about Hyderabadi Egg Biryani, I stated that Hyderabad is famous for Biryani — it’s nirvana for all rice and biryani admirers. In Hyderabad, they have so many classes of Biryanis. 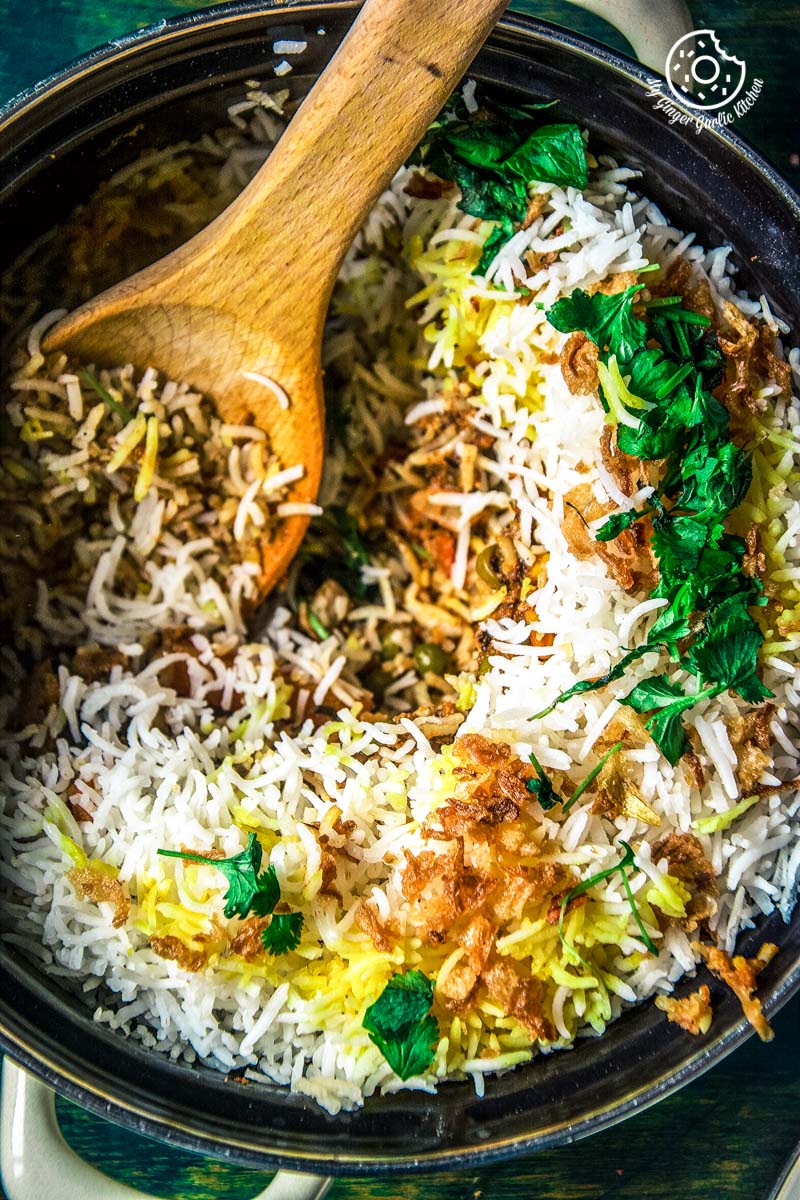 So after sharing one of my favorite dishes today — Hyderabadi egg biryani, I have another remarkable elegance from Hyderabadi/Deccani Cuisine. The dish is Restaurant Style Hyderabadi Veg Dum Biryani.

What is Veg Biryani?

This Hyderabadi Veg Biryani is another very famous legendary and authentic gratifying royal dishes of Deccani Cuisine. It is believed that the origin of biryani is from Hyderabad State. It is also believed that in ancient times all types Biryanis were introduced by Mughals and Nawabs in India. 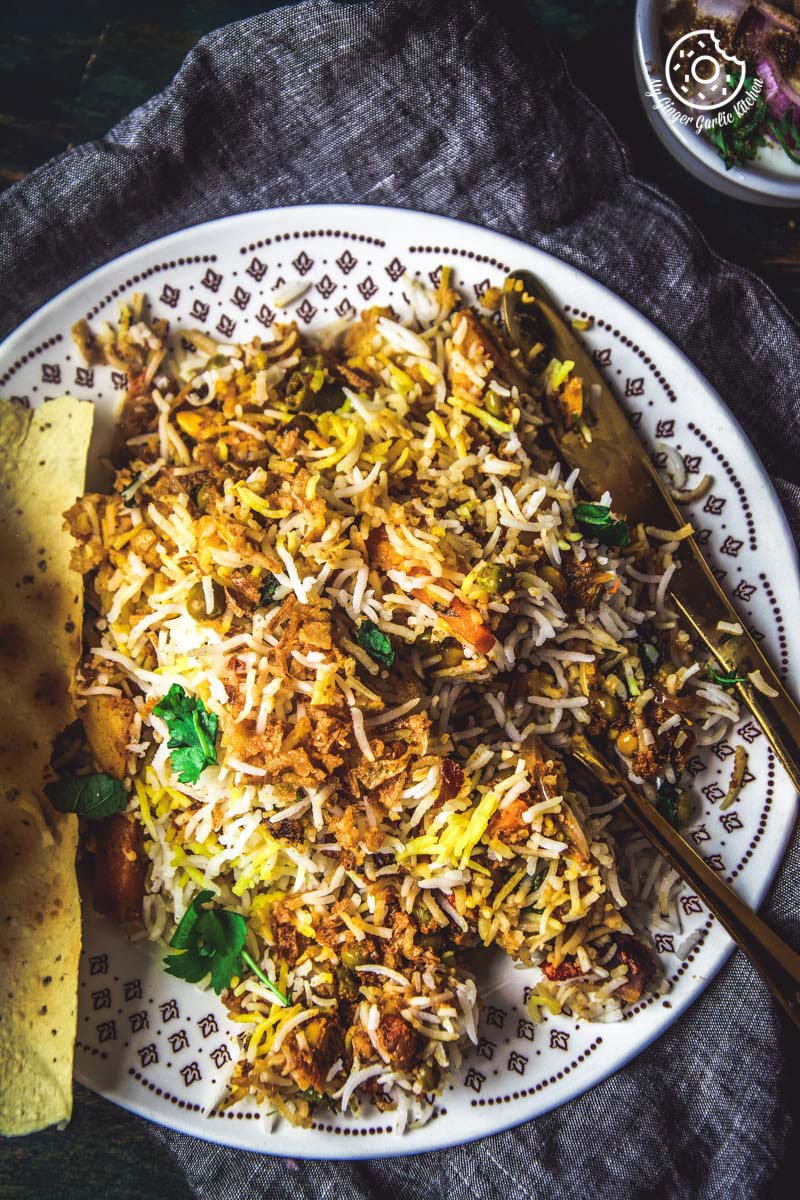 Traditionally, biryani is made in a large clay pot also know as ‘handi’. dum cooking is a technique where you slow cook dish in a steam. In this method, pot is sealed with wheat flour dough first and then cooked slowly. This way the dish gets cooked in its own steam and in its own juices on a slow heat, which infuses the flavors and aroma of its own herbs and spices in the food.

Biryani ( also known as Biriyani or Biriani ) is one of the most royals and luxurious rice-based dishes of Indian cuisine. This dish is usually slow cooked.

As I have already mentioned earlier my Vegetable Tahiri post that biryani is a time taking process. A good biryani needs time, patience, care and a tempering of love. 🙂 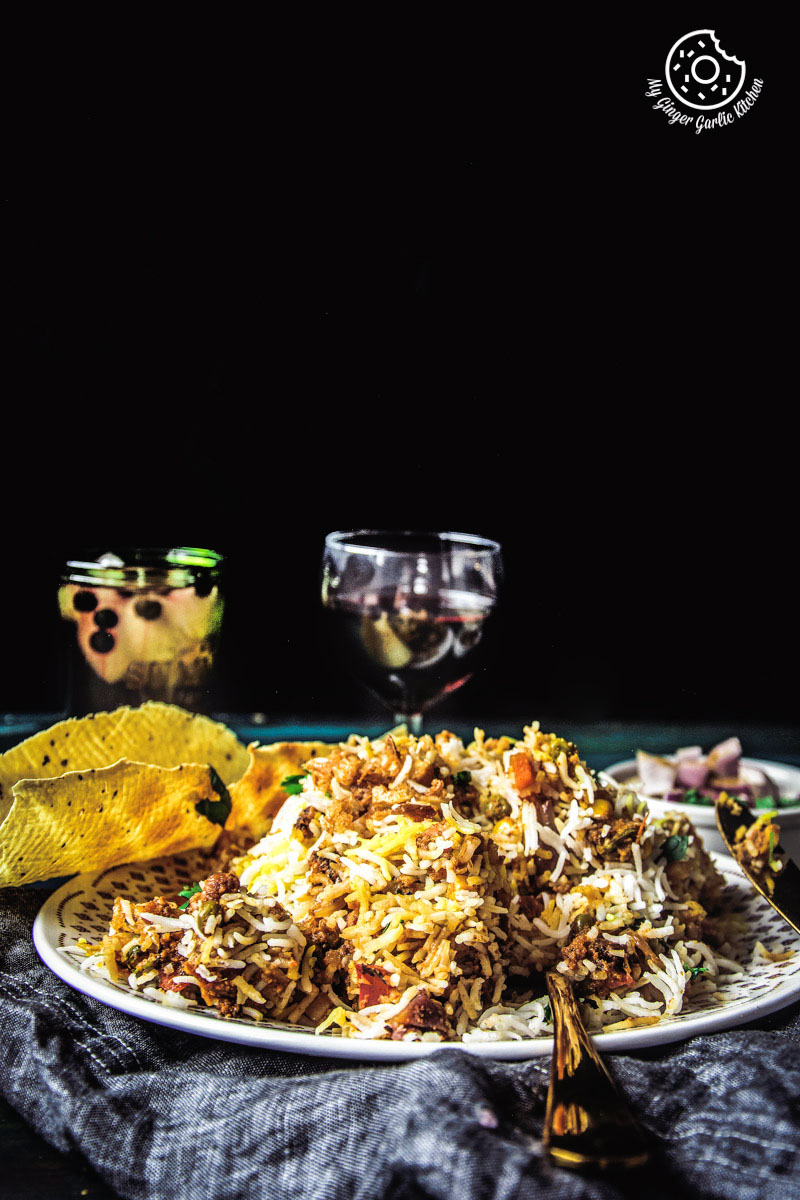 How do you make Vegetable Biryani?

For this **Vegetable Biryani **recipe, all the veggies are first marinated for 30 minutes. If you want you can marinate veggies for a longer time. Later they are cooked with onions and tomatoes. They are finally layered with cooked basmati rice and cooked for about 15-20 minutes.

However, if you want to speed up this cooking process, then you can surely opt for pressure cooking. For this you’ll have to cook marinated veggies in a pressure cooker. After that, rice is added and pressure cooked until cooked through.  I will soon share the pressure cooked veg biryani recipe. 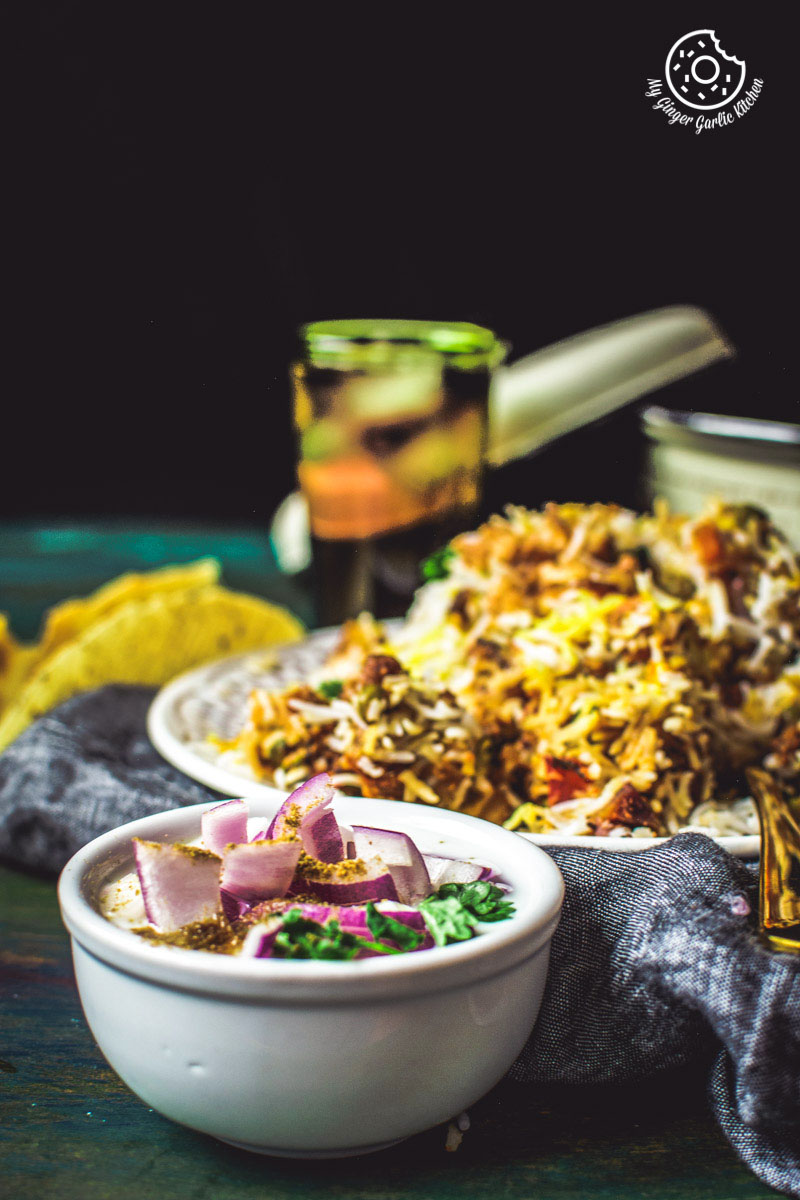 You can add any of your personally preferred vegetables for making this veg dum biryani. I have only added cashews to this biriyani, you can also add almonds and raisins if you like.

How to serve vegetable Biryani?

Identical to all other biryanis, this veg dum biryani also goes well with a simple raita and papad. Restaurant Style Hyderabadi Veg Dum Biryani is a spicy and filler dish on its own, so you really don’t need any sides for biryani.

The fragrant medley of masalas, veggies, and rice along with its distinctive taste makes this briyani desirable and lip-smacking good. In this veg biryani, the delicate flavors of the aromatic garam masala, onions, tomatoes and yogurt are so well blended with the vegetables and rice. Each spoonful of this light textured, spicy and aromatic rice biryani is a delight. 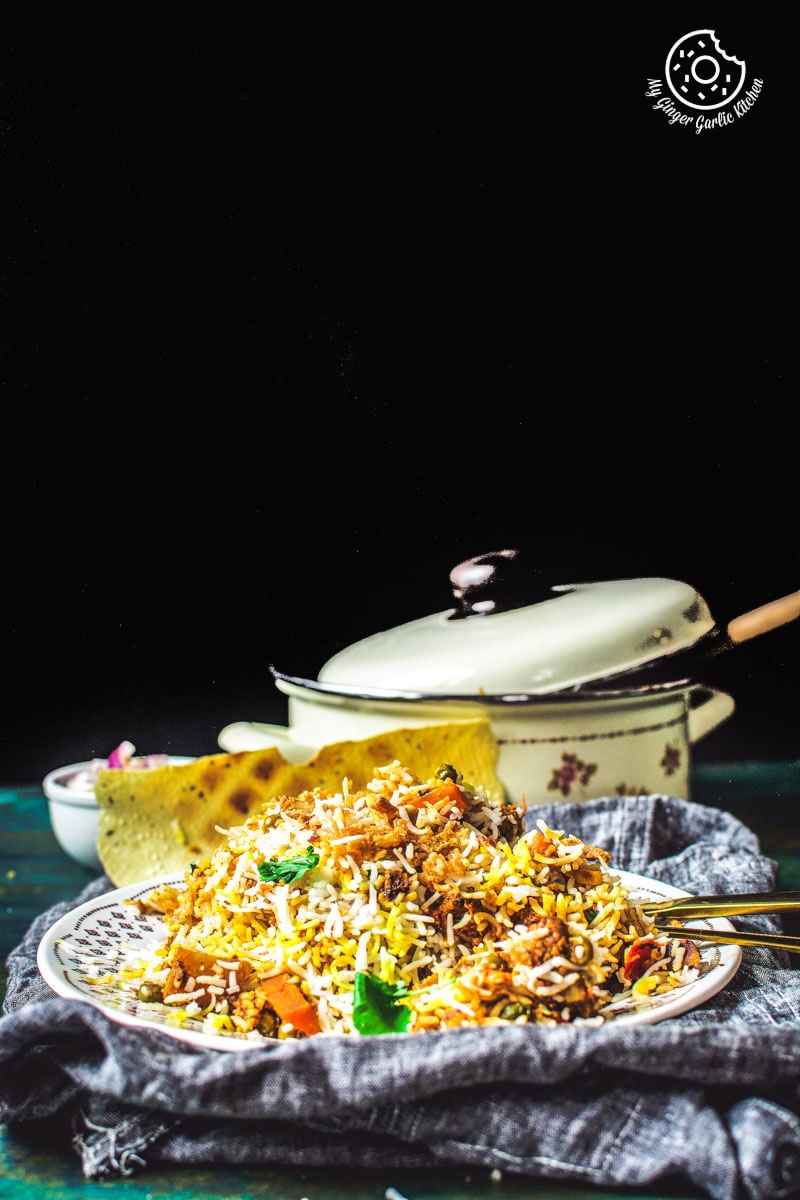 For more delicious rice recipes, you should definitely check the following:

How to Make Schezwan Fried Rice

Learn to Make Vegetable Biryani or Dum Biryani Recipe with step by step video tutorial. This is made with marinated vegetable curry and steamed rice. ★★★★✰
(Rating: 4.2 from 316 reviews)