Egg Bhurji or Anda Bhurji is a spicy, delectable, and flavourful Indian version of scrambled eggs where eggs are scrambled with onion, tomato, green chilies, ginger, and some aromatic spices. It’s ready in under 15 minutes.

Egg Bhurji has an accurate amount of flavor and spices that makes a gratifying meal for any time of the day when served along with some pav (dinner rolls), bread slices, or paratha. Bhurji Pav is a very famous street food combination.

Egg Bhurji is so popular across India that it can be found everywhere — be it street kiosks, restaurants, or roadside eateries (dhaba). And this Bhurji is loved by all. This is because it is super simple and easy to make, healthy, and tastes appetizing too.

Like many other Indian recipes, this Egg Bhurji also has many variants. Everyone has their own preferred version of making Egg Bhurji which might come from their favorite street stalls, restaurant, or the one they grew up eating in their home. The contrast lies in the different cooking techniques and spice powders used in the bhurji recipe.

This Egg Bhurji recipe is my favorite variation of Egg Bhurji which I obtained over the years. This street style version is my family’s absolute darling. It just tastes darn good.

My recipe uses minimal ingredients which are easily available in any kitchen, and that includes special masala powder called ‘Pav Bhaji Masala’ which is also used in Pav Bhaji Recipe. This spice powder is a must in all street style egg bhurji recipes.

Another good thing about Egg Bhurji is that it is so easy to make that you can make it anytime you are craving for scrambled eggs. This is even great for late-night meals.

Just prepare it once and you will get addicted to cooking it quite often. :)

What is Egg Bhurji?

Egg Bhurji is the spicy version of Indian style scrambled eggs that is also known as ‘Anda Bhurji’. Here Anda = Egg, and Bhruji = Scrambled. So this Anda Bhruji is an accurate hindi translation of scrambled eggs.

In this scrambled eggs version, eggs are cooked along with a spicy onion and tomato masala.

This is an easy and super quick recipe that makes a flavorful delicious meal for any day.

This Egg Bhurji is:

✔︎ adored by all age groups.

✔︎ perfect for the lunch box.

✔︎ versatile and can be eaten for all meals.

How to serve Egg Bhurji?

Egg Bhurji is such a versatile recipe and you can have it for any meal of the day.

You have it with toasted buttered bread slices. Or serve it along with buttered ladi pav.

Make a roll with the egg bhurji stuffing and tortillas, or roti. You can also add some veggies alongside with bhurji and make your own ‘Egg Bhurji Kathi Roll’.

Serve it along with paratha, or chapati (puri, naan, tortilla). Or just use it as a filling for pita. Any flatbread would go nicely with Bhurji.

You can make this Egg Bhurji when:

What are the ingredients of Egg Bhurji?

As I said earlier, this type of scrambled egg is made using minimal ingredients. The ingredients which I used in this recipe are:

How to make Egg Bhurji?

Here is how to make Egg Bhurji in simple 5 steps:

You can find the full recipe with detailed instructions in the recipe box on this page.

How to make Vegan Egg Bhurji?

To make this Bhurji vegan, replace the eggs with the 1.5 cups of crumbled tofu or with cooked soya granules. And replace butter with vegan butter.

How to make a curry version of Egg Bhurji?

Egg Bhurji is usually served dry. But if you want the curry version, then you can surely make it by adding some water at the end.

Once the bhurji is ready to add some water (about 1/2 cup) to it and let it boil for 2-3 minutes. Do not add too much water, or else it will turn watery. Also, add 2-3 tablespoons of fresh milk cream at the end. It gives a rich taste to the curry.

Some other delicious Egg recipes: 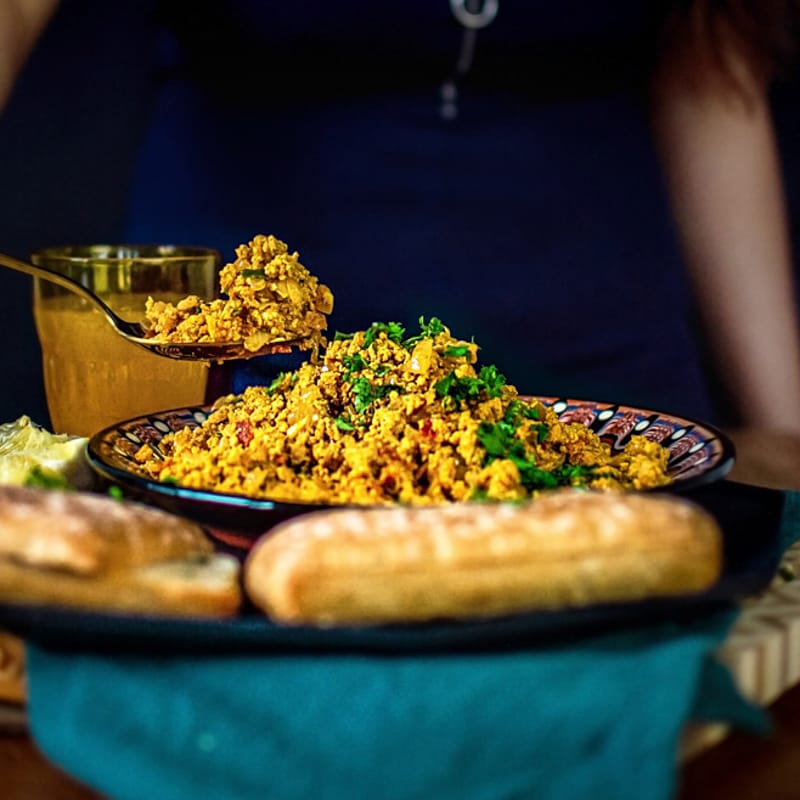 Egg Bhurji or Anda Bhurji is a spicy, delectable, and flavourful Indian version of scrambled eggs where eggs are scrambled with onion, tomato, and spices. ★★★★✰
(Rating: 4.6 from 7 reviews)

How to make Egg Bhurji //