Mysore Pak is an aromatic, delicious, and melt-in-mouth sweet which is very popular in South India. This classic Indian sweet originated in the royal kitchen of Mysore Palace. Mysore Pak is Southern India’s one of the most archetypal sweets and got its name from its city of origin – Mysore. This delicate and delicious sweet dish is made using only 3 ingredients — chickpea flour (gram flour/besan), sugar, and ghee.

Unlike other popular Indian sweets (aka mithai), Mysore Pak is an easy and quick recipe which can be prepared in just 15 minutes. And you can painlessly make this dessert using only 3 ingredients easily available in your pantry. This delightful sweet recipe is adored by folks of all age-groups and can give your meal a perfect ending.

What is Mysore Pak?

Mysore Pak is called ‘Mysuru Paaka’ in Kannada Language, which is the official language of Indian state of Karnataka. Here ‘Paaka’ means a sweet syrup and ‘Mysuru’ refers to Mysore city.

Mysore Pak is a South Indian sweet dish made with gram flour, sugar, and ghee. This dish originated from Southern Indian State of Karnataka. This sweet (mithai) is made with a lavish amount of ghee. It usually has a texture similar to fudge.

To make the perfect Mysore Pak, one does not have to be born with any special skills. However, understanding the whole process is essential to the ideal texture. A perfectly made mysore pak is light in weight, soft and has edges with crumbs, and has a delicious aroma. After cooling, you should not see any remains of ghee across it, and it shall not leave ghee when you eat.

What is the origin of Mysore Pak?

As the name suggests, Mysore Pak originated from Mysore. It is believed that this sweet dish was first developed in the Royal Kitchens of Mysore Palace by the royal cook named Kakasura Madappa.

He created this dish by the concoction of gram flour, ghee, and sugar. But he didn’t know what to call it. When the king asked about the name of this dish, he just said, ‘Mysuru Paka’. Pak or Paka, in Kannada language means ‘sweet’. So ‘Mysore Sweet’ is the simple translation of the name for this sweet.

What is the right consistency of sugar syrup for Mysore Pak?

The simple syrup is made with sugar and water. For making Mysore Pak, sugar syrup has to be of one-string consistency, or heated to the soft ball stage. Making sugar syrup is the only stage you need to execute with some careful attention.

What is the shape of Mysore Pak?

Mysore Pak is usually cut and sold into square and rectangle pieces. However, when you are making them at home, you can choose any shape you like.

If you like this Mysore Pak recipe, then here are some other besan recipes which might also interest you:

How to Make Waffled Besan Chilla

What flavors can be added to Mysore Pak?

Traditional Mysore Pak is made without any flavorings. However, you can make the alteration to this authentic sweet dish as per your taste preferences. And playing with flavors create no harm. For flavoring this sweet you can try adding cardamom or rose essence to the sugar syrup.

You can also add your favorite nuts for a richer and nutty texture. Simply chop or crush any of the desired nuts such as almonds, cashews, pistachios, walnuts. Add them to the gram flour mixture.

What is the shelf life of Mysore Pak?

Mysore Pak has a longer shelf life due to the addition of very little water which is used in the sugar syrup. Mysore Pak stays fresh in a cool and dry place for about two weeks. But personally I like the fresh Mysore Pak — it tastes best when it is fresh.

Some other delicious recipes made with ghee are:

How to Make Gajar Ka Halwa

How to Make Potato Halwa

When to serve Mysore Pak?

Mysore Pak goes well with any type of elaborated Indian meal, so you can serve it as an after meal dessert any time of the year. In Southern India, this sweet dish is traditionally served at weddings, baby showers, and other festive occasions.

Also, you can make this sweet dish when you have some special guests coming over for dinner over short notice. You can treat them with this delicious and authentic Royal Indian Sweet which is ready in no time.

What is the texture of Mysore Pak?

The texture of Mysore Pak varies on the amount of ghee you add to the gram flour. When less ghee is added to the besan, then Mysore Pak comes out hard and porous. When you add less ghee, the wetness from the sugar syrup sneaks away as steam through the greased gram-flour and make Mysore Pak porous.

But when you add an ample amount of ghee, the Mysore Pak would be soft and dense. Excess ghee in the gram flour fills the pores, and thus, you get a denser and softer Mysore Pak.

What is the color of Mysore Pak?

Mysore Pak is made using lightly roasted gram flour. So this is usually yellowish or light brown in color.

How to store Mysore Pak?

How to make Mysore Pak?

Mysore Pak is a unique sweet which can be prepared very easily at home without making much efforts. To make Mysore Pak, first you roast gram flour. Then pass it through a sieve and add a generous amount of ghee to it. Addition of ghee makes Mysore Pak more delicious and enhances the flavours, so do not be wary, and add plenty of Ghee.

After that, you make a sugar syrup and add this gram flour and ghee mixture to the syrup. Cook it on low heat and keep stirring constantly. Keep adding ghee. Finally transfer it into a greased tray. Let it cool for 15 minutes, and cut into desired shapes. Finally, they are ready!

Some Tips for making the best Mysore Pak at home:

Here are a few more desserts to amp-up your festive dinner experience:

How To Make Rose Srikhand

How To Make Ghevar 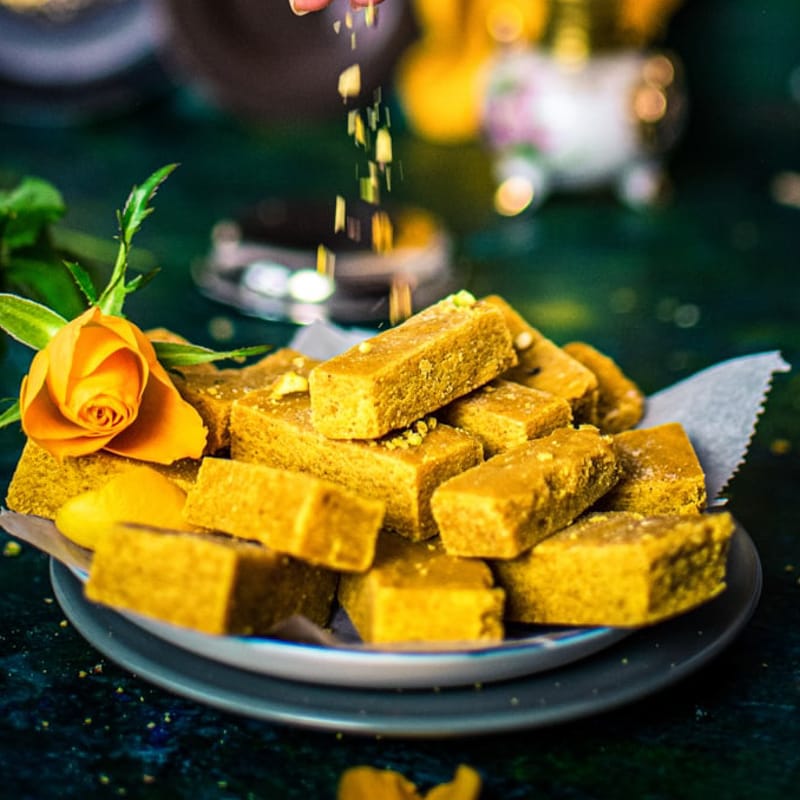 Mysore Pak is a popular, aromatic, delicious, and melt-in-mouth sweet from South India. This delicate sweet is made with chickpea flour, sugar, and ghee. ★★★★✰
(Rating: 4.3 from 44 reviews)

How To Make Sugar Syrup:

How To Make Mysore Pak: